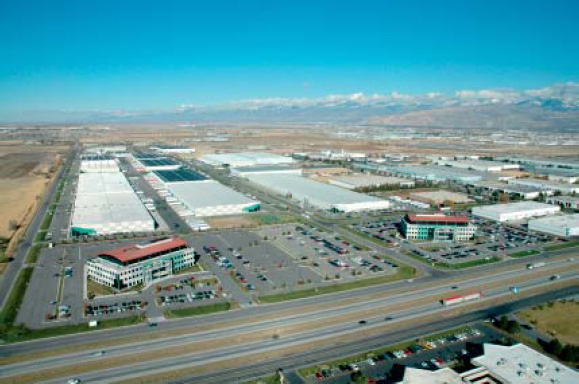 Ninigret Park is an outgrowth of Centennial Park, a major commercial center that has helped foster Salt Lake City’s leading role as a regional distribution hub for the mountain and western states. Bounded by California Avenue to the north and 2100 South to the south, Ninigret Park offers unparalleled convenience and access. Salt Lake City International Airport lies only 3 miles to the north, Interstate Highways I-80, I-15 and I-215 are all located within a 3-mile radius. In addition, downtown Salt Lake City, the host city for the 2002 Winter Olympic Games, is only a 10 minute drive away. About 40 minutes away, are some of the world’s greatest ski resorts, including Deer Valley, Snowbird, Alta and Park City. To the south, are Utah’s scenic National Parks.

Basic features of Ninigret Park include the following: a belief in a park-like setting and environment; a belief in strong property management; the construction and maintenance of the most advanced technological features in or within a building; a strong dedication to service; a need to provide speed, efficiency and flexibility to the tenant; and an overall belief in enhancing the quality of life of any occupant of the Park.

The infrastructure of Ninigret Park is fully built out with sewer, water, storm drainage, and roads with several entrances and exits in the Park. In addition, the Park is fully outfitted with fiberoptic cable, with ISDN computer networking capability for such amenities as high-speed Internet usage, teleconferencing and video conferencing.

Park Expansion
In March 2000, The Ninigret Group announced a major expansion of Ninigret Park to an adjacent 405 acres that borders California Avenue and blankets Bangerter Highway (40th West). The expansion made the Park Utah’s 4th largest commercial development the largest project of its type in 30 years, since the mid-1970s when ground was broken at The Salt Lake International Center. The purpose behind acquiring the 405-acre Property was to develop, lease and own significant amounts of industrial, flex and office space and to sell strategic blocks of land to end users. Equally important, the 405-acre expansion area is a prime example of a successful cooperative effort between the state’s regulatory agencies and private industry in transforming an undeveloped property into a productive new development. The 400 acres were used by its former owners, Harshaw Chemical and Engelhard Corporation, as tailing ponds and have had remained economically barren for some time. With the cooperation of the Utah Department of Environmental Quality, Ninigret Construction Company has been remediating the property, by adding limestone to treat and compress the ponds in order to make the site buildable, with an expected completion date of 2008.

Ninigret Construction Co.
Ninigret Construction Company, L.C., the construction arm of The Ninigret Group has managed the remediation and site development of the 405 acre remediation project located at California Avenue and Bangerter Highway. As of January 2006, approximately 230 acres of the 405 acres have been remediated, platted and over 9,000 linear feet of roads have been constructed. Since its inception, NCC has grown into a full scale excavation and remedial contractor with an extensive array of equipment resources necessary to manage large excavation tasks and soil management issues.

Development Options
Office Campus Prototype The Ninigret Group aspires fi rst and foremost to building quality and value. Our vision is to create an environment that gives the owner or user maximum opportunity to deliver profitability, while placing a premium on the comforts of the individual within the work place.

We approach each project on a collaborative, team basis. This would include the architects, engineers, site planners, project managers, construction team, lenders, designers, accountants and developer. Our challenge is to build the best for the least but ultimately to deliver more than what was asked. This requires basic ingredients: experience, hard work, professionalism, and a willingness and determination to approach things in a different way. Through this process, each member is aware of the job requirements, the necessity to identify value-enhancing features for the project, and the need to complete each element of the job on a timely basis. The clients’ targets become our targets, and we seek to engage each member of the process, including each subcontractor, by instilling the passion we feel toward the project. Complete flexibility exists, however, for the client to augment or replace the development team with its own professional personnel. In addition, if a client wishes to construct space on a build-to-suit or a build-to-sell basis, The Ninigret Group is prepared to fulfill such needs using either The Ninigret Group’s team or a team of the client’s choosing.